Blog: Where is the Transparency? Only 6% of Taylor Swift Tickets Reserved for the Public!

Primary ticket sellers (those contracted by promoters, music artists, and teams to initially sell and distribute tickets – the most common and largest in the world being Live Nation/Ticketmaster) are unwilling to inform the public about how many tickets are actually put on sale. Indeed, they fight tooth and nail to avoid such disclosure. The reason is to protect a scheme which has been an industry secret for years, ticket holdbacks. In these scenarios, primary ticket sellers secretly withhold tickets from the public on-sale. This allows them to support a system called Slow Ticketing, which generates the artificial impression of scarcity among consumers, leading to higher prices.

Fans of Taylor Swift saw this tactic on full display for the artist’s 2023 Eras tour. Ticketmaster, the primary seller for the tour, sold tickets over two days of exclusive presales. Demand was always expected to outsize ticket supply and every show was going to sell out. Despite this obvious reality, the pre-sales crashed. Moreover, Ticketmaster was forced to cancel the scheduled public on-sale.

The fact that all of this chaos happened before the public on-sale, raises the question of how many tickets were actually available to the public. Was the public only going to be offered half of the total tickets? That would be considered a high number of holdbacks by industry standards. However, that number pales in comparison to the paltry percentage of tickets actually put on sale. The Wall Street Journal estimated that some 94% of tickets were held back and only 6% were left remaining – about 160,000 tickets total – for the cancelled on-sale.

Since then, tickets are suddenly being made available. Ticketmaster didn’t find these additional tickets hiding under a rug. It chose to hold them back, even before the Verified Fan pre-sale chaos, and intended to trickle them out later at higher prices. Artificially inflated costs obviously harm consumers. The fact that this is all being done behind the scenes without consumer knowledge, exacerbates the harms and further skews an already confusing market landscape.

Experts have aptly suggested that these tickets were actually intended to be Ticketmaster Platinum tickets, which are just the same old tickets offered at a higher price There isn’t anything wrong with the best seats being offered for a higher price However, it’s shameful and wrong to sell every ticket in exclusive “Verified Fan” presales and leave the public in the dark with nothing but higher-priced Platinum Tickets available for the public on-sale.

Ticketmaster conveniently changes its tune in whatever way serves its goals. Initially, in a blog about the Taylor Swift pre-sales, the company said “nobody – not even a bot – could join a queue” and as a result “90% fewer tickets are currently posted for resale”. Once the heat was turned up on Ticketmaster and its mishandling and flaws were revealed, the company deleted this from its public blog. It did so in order to try and blame bots and resellers for its problems. Blaming bots or ticket brokers or ticket resale generally is the company’s common scapegoat when it is blamed for failures. To be sure, if illegal bots bought up Swift tickets, those bot users should be reported by Ticketmaster to authorities.

Blaming others is Ticketmaster’s classic deflection tactic. Hiding the practice of holdbacks, and the refusal to disclose how many tickets are actually made available to the public is a vital component of this scheme. The public, government regulators and legislators should demand transparency so fans can make educated choices. 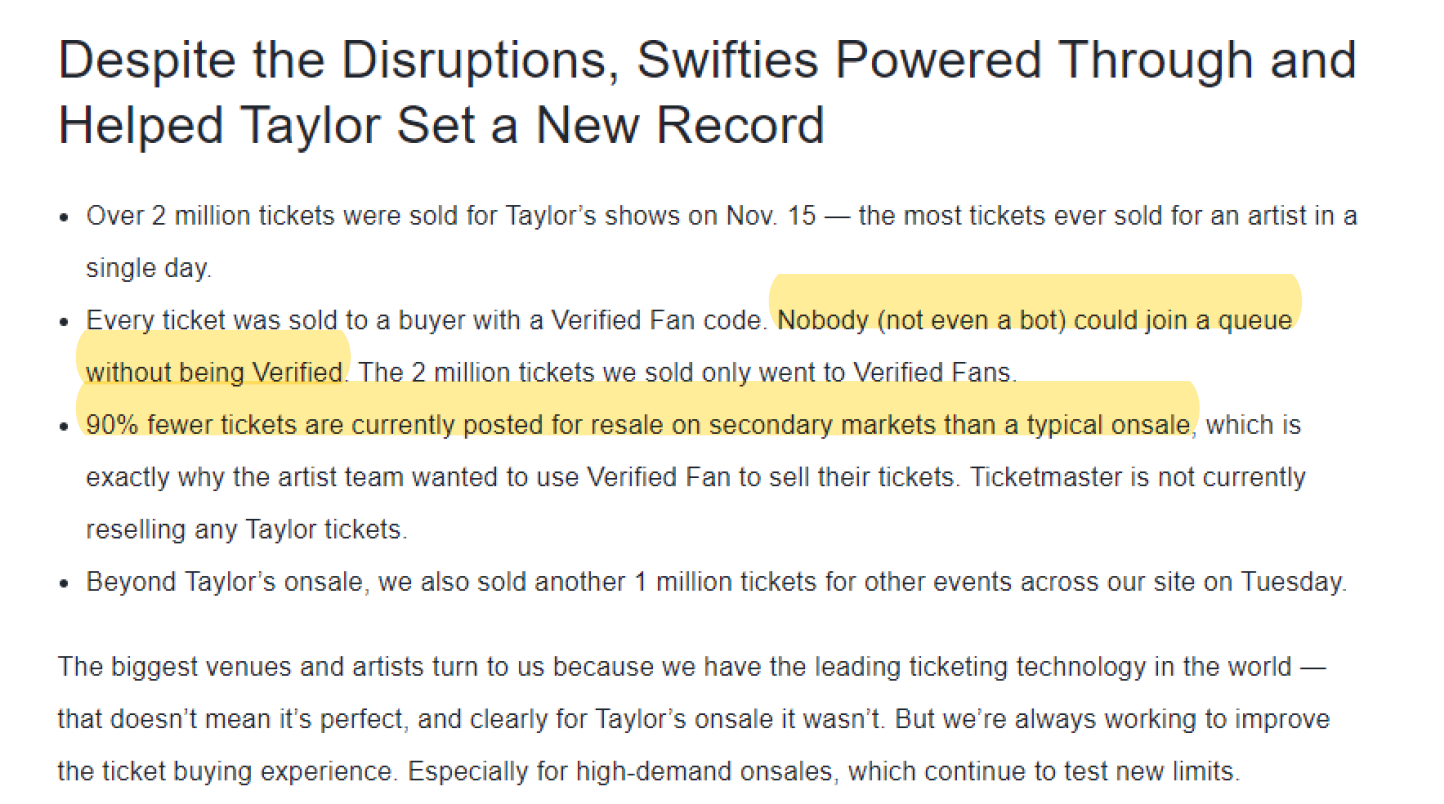 Following chaos, sale cancelations, and disappointment, Ticketmaster’s use of holdbacks is one more example of consumer harm and a demonstration of the dire need for reform in the ticketing industry.

The tactic of holding back tickets wasn’t invented for the Eras tour. It’s been the worst kept secret in primary ticketing for some time. Don’t take our word for it – according to a report from the New York State Attorney Generals’ office, primary ticket sellers sometimes withhold up to HALF of the total number of tickets available for a show or event. Another report, commissioned by the City of Honolulu, found that sellers have even withheld 93% of all tickets available from the initial on-sale.

At a Live Event Ticketing 101 event on Capitol Hill in November 2022, experts from across the ideological spectrum gathered to discuss issues at the heart of the ticketing industry – including holdbacks.

And Greg Guice of Public Knowledge raised noted the direct consumer harms at play when primary ticketers use holdbacks, saying, “Building a ticket price on an artificial scarcity gives the consumer the impression that they need to get it now, at whatever cost. That's unfair, and in fact we have to FTC now saying that’s unfair.”

Protect Ticket Rights strongly opposes holdbacks and supports more transparency in the ticketing industry. It’s time for new federal rules to protect fans across the country from this and other schemes that increase prices and lead to worse customer service.